Since 2013, Cradle has undertaken some 20,000m of diamond (46 holes for 6,390m) and RC (98 holes for 13,752m) drilling over the southern and eastern portion of the Panda Hill Carbonatite. This drilling (Figure 5) has successfully replaced and improved upon the historical drilling information that was previously relied upon. Drilling by Cradle, averages 148m deep and has only tested some 40% of the area of the carbonatite intrusion (Figures 5 and 6).

Additionally Cradle has undertaken an aerial magnetic survey over the deposit and has remapped the entire deposit outcrop. This work has identified multiple high-priority targets for further drilling, allowing significant scope for future increases in the deposit endowment. 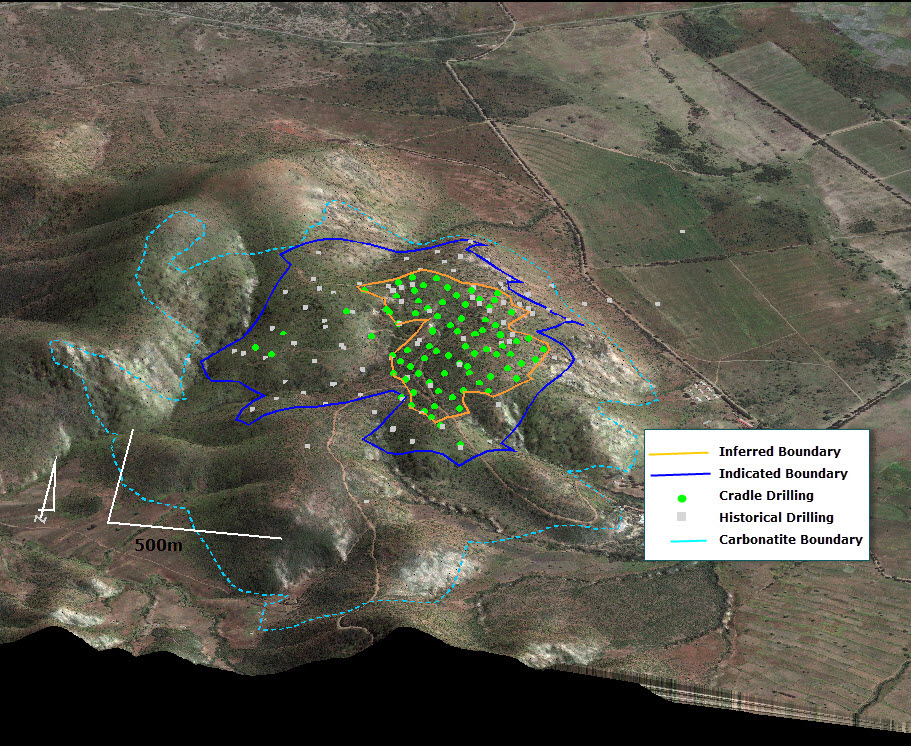 Previously, the Panda Hill Carbonatite intrusion has been subject to multiple phases of exploration work since the 1950s. This work targeted both the niobium and phosphate endowment of the deposit.  From 1953 to 1965, the Geological Survey of Tanzania (GST) undertook mapping, diamond drilling and trenching (17 diamond holes for 1,405m) to assess the niobium and phosphate potential. From 1954 to 1963 the MBEXCO joint venture was formed between N. V. Billiton Maatschapij (Billiton) and the Colonial Development Corporation, London.  MBEXCO drilled 66 diamond holes for 3,708m, excavated numerous pits, sunk two shafts and undertook trial mining and constructed a trial gravity and flotation plant on site.  Concentrate from site was sent to Holland for further processing, with positive early metallurgical test-work results noted.

From 1978 to 1980 a Yugoslavian State Enterprise (RUDIS) undertook a joint study in collaboration with the Tanzanian Mining Industrial Association and State Mining Corporation (STAMICO).  This work included mapping, diamond drilling and pitting (13 diamond holes for 1,306m) to test the niobium endowment of the deposit.